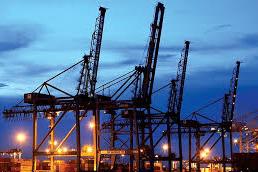 During inauguration of the Maritime India Summit in Mumbai, Prime Minister Modi has released a program to promote port-led development in the country . The report estimates that the program could lead to annual logistics cost savings of close to $5.3 billion and boost India’s merchandise exports to $110 billion by 2025.

Govt. Eases Rules for Foreign Firms to Set up Branch Offices in India

The Government has relaxed the approval process for foreign firms to set up their branch, liaison and project offices in the country. Except for defense, telecom, private security, information and broadcasting, and non-government organization sectors, such approvals can now be given by designated banks.

Prime Minister Modi has launched a pilot e-trading platform for the National Agriculture Market. He said that the initiative will usher in transparency, which will greatly benefit farmers. The project will operate through an online portal which is being linked to the Mandis (grain markets) of all the States in India.

India is open to creating new policy guidelines, said Telecom Min. Ravi Shankar Prasad. Minister launched phones manufactured in India by LG Electronics. The government is working to make India a big hub of electronics manufacturing and is providing various incentives to companies to set up their shop in India. Demand for electronic products in India is expected to reach $400 billion by 2020.

In order to attract imported freight traffic including containers, coal, iron ore and so on, Indian Railways will withdraw the levy of Port Congestion Surcharge immediately. The surcharge was 10 percent on basic freight and its withdrawal will generate additional incremental traffic. 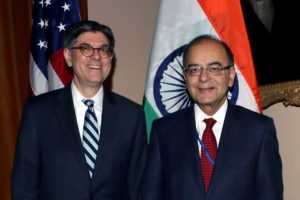 Finance Minister Arun Jaitley visited the U.S. to participate in the Spring Meetings 2016 of IMF and World Bank. Jaitley attended the 6th Ministerial Meeting of India-U.S. Economic and Financial Partnership with Treasury Secretary Jacob Lew. A Joint Statement issued during the occasion noted the efforts undertaken by the two sides to deepen mutual understanding, and to improve cooperation across a wide range of issues.

The International Monetary Fund (IMF) has retained India’s growth projections for 2016-17 at 7.5 percent, while it cut global economic expansion by 2 percentage points to 3.2 percent for 2016 and 1 percentage point to 3.5 per cent in 2017. According to the IMF, India’s growth will continue to be driven by private consumption “which has benefited from lower energy prices and higher real incomes.”

Foreign direct investment (FDI) into the country increased 37 percent to $39 billion during 2015. The foreign investment inflows stood at $28 billion in 2014, according to Government data. The computer hardware and software sector attracted the highest FDI, followed by services, trading business, automobiles and chemicals.

IBM, RCom Team Up to Drive Cloud Adoption by Business

IBM has entered into an agreement with Reliance Communications (RCom) to offer customers a portfolio of secure and scalable infrastructure as service offering running on the IBM Cloud. An integrated telecommunication service provider, RCom has a client base of more than 115 million, including more than 39,000 large enterprises and small and medium business across industries.

Jaitley to leave for 5-day official visit to Britain

Rupee falls to fresh low of 71.43 per US dollar