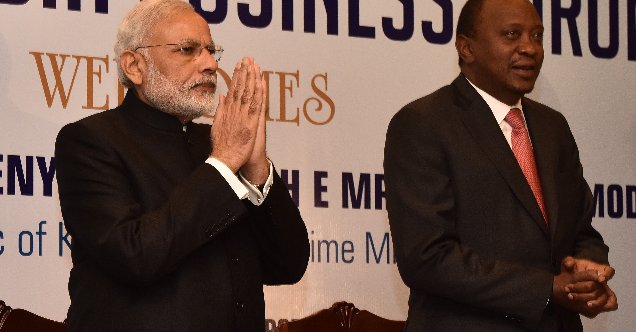 Nairobi– India and Kenya on Monday agreed to boost cooperation in the defence and healthcare sectors even as Prime Minister Narendra Modi, without naming Pakistan, said that all those who shelter terrorists should be condemned.

“While we are conscious of our development challenges, (Kenyan) President (Uhuru Kenyatta) and I also share concerns of security and stability,” Modi said in a joint press statement with Kenyatta following delegation-level talks here.

Following the talks, India and Kenya signed seven agreements, including a memorandum of understanding (MoU) on defence cooperation.

The Prime Minister said that as India and Kenya are connected by the Indian Ocean, both have strong maritime traditions.

“As such, our closer cooperation in the field of maritime security occupies an important place in our overall defence and security engagement,” he said.

“The MoU on defence cooperation signed just now would strengthen our institutional cooperation between our defence establishments.”

Modi said that he and Kenyatta recognised that terrorism and the rapid spread of radical ideologies posed a common challenge to the people of both countries, to the region and to the whole world.

Modi also flagged health care as another key area of cooperation between the two countries.

“I understand that health care is President Uhuru’s key priority,” he said.

“India’s strength, especially in pharmaceuticals, can join hands with your priorities to shape an affordable and efficient health care system in Kenya,” he said, adding that this would make Kenya a regional medical hub.

This apart, India handed over 30 field ambulances to the Kenyan Defence Forces

Modi said the historical people-to-people ties between India and Kenya have provided a strong basis for a wide-ranging partnership which extended “from agriculture and health to developmental assistance, from trade and commerce to investment, from closer contact between our people to capacity building, from regular political consultations to defence and security cooperation”.

He said India was ready to share its development experiences and expertise, and concessional credit and capacities to assist in Kenya’s development objectives.

Among the agreements signed on Monday, two pertained to lines of credit from India to Kenya — one on development of various small and medium enterprises and the other on upgrading a textile factory.

Later, addressing students at the University of Nairobi, Modi said that all those who shelter terrorists should be condemned.

“We live in a world where preachers of hate and violence are threatening the fabric of our society,” Modi said.

“As young dynamic citizens of Kenya and as members of the African society, you would need to be watchful of those who spread radical ideologies,” he said.

“And be equally condemning of those who who give shelter to terrorists and use them as political instruments.”

The Prime Minister said that India wanted a lasting partnership with Africa.

“Let us also not forget that together, India and Africa represent a third of humanity,” he said.

“We want to forge a lasting partnership that does not rely on old models and rules of engagement, one which focuses on and empowers people, one where we share the fruits of each other’s prosperity, one which seizes the opportunities of the 21st century and also responds to its challenges to bring safety and security to our societies.”

Modi said that among the rising African economies, Kenya has been one of the strongest performers.

“With significant presence of Indian companies in Kenya, our investment partnership is robust, diverse and vibrant,” he said.

Prior to his speech, the Prime Minister offered floral tributes at a statue of Mahatma Gandhi in the university.

Earlier on Monday, Modi laid a wreath at the mausoleum of Kenya’s first President Jomo Kenyatta.

Modi arrived in Kenya from Tanzania on Sunday on the final leg of his four-nation Africa tour.

Surgical strike on black money or carpet-bombing of the poor?

Indian firms’ direct investment abroad in May up over 48 percent