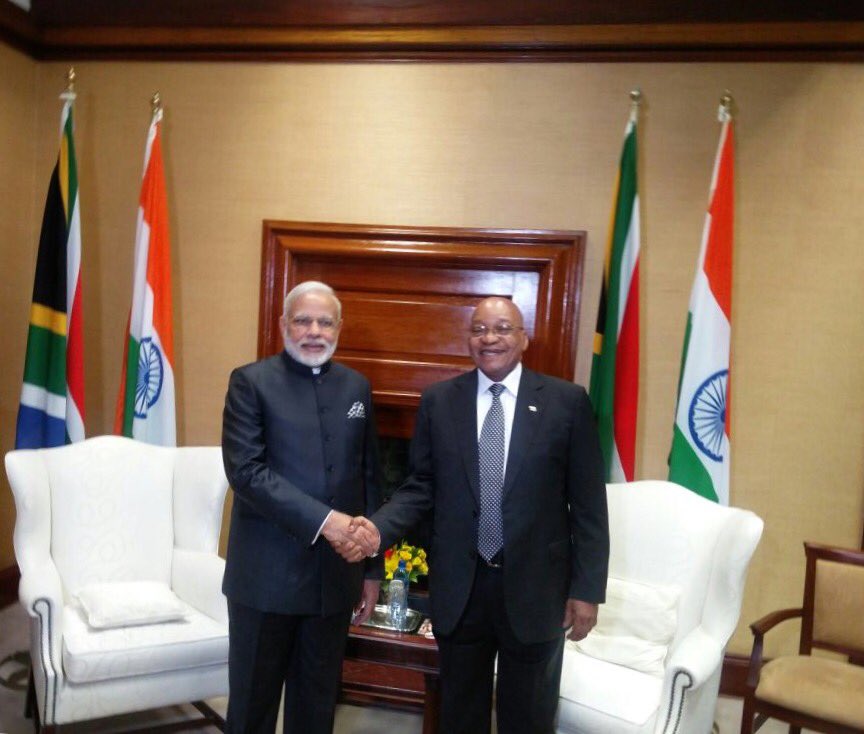 Pretoria– Emphasising upon the need for India and South Africa to further diversify their trade basket, Prime Minister Narendra Modi here on Friday said bilateral trade between the two countries had risen 380 per cent over the last decade.

“South Africa is India’s key trade and investment partner. In the last ten years, bilateral trade has grown almost 380 per cent. The story of investments also continues to be bright. There is continuous flow of investments both ways. More than 150 Indian companies are operating in South Africa. The scope is tremendous,” Modi said in his address at the India-South Africa Business Summit.

Along with South African President Jacob Zuma, Modi attended the Summit which aims to boost the economic ties between the two countries.

“We must look at ways to diversify our trade basket. Our active partnership across various facets and forums is a testimony to the fact that such engagement is possible,” Modi said.

“South African business excellence and Indian capacities must leverage each other for growth and development in our two countries,” he added.

Calling upon South African investors to increase their investments into India, Modi said that emphasis has been given upon the ease of doing business.

“We have taken decisive steps to ease the licensing processes and rationalize the provisions relating to clearances, returns, and inspections. India today is among the most open economies.

“We have liberalised our FDI regime in most of the areas and in all possible ways,” he said.

“We can work together in a number of areas from defence to dairy, from hardware to software, from medicines to medical tourism, from soft skills to science and technology. There are opportunities for us,” he added.

Reiterating that India’s growth rate has been the bright star in the global economy, he said, “India has become the fastest growing large economy in the world.”

“Not only that, in 2014-15, India contributed 12.5 per cent of global growth. Its contribution to global growth is 68 per cent higher than its share of the world economy,” he said.

Earlier, both sides also signed four agreements, including two on information and communication technology and tourism.

Modi arrived in South Africa from Mozambique on Thursday night on the second leg of his four-nation tour of Africa.

This is his first visit to mainland Africa and is also the first prime ministerial visit from India to South Africa since the then Prime Minister Manmohan Singh arrived in 2013 for the G20 summit in Durban.

Apart from Mozambique and South Africa, Modi will also visit Tanzania and Kenya.

India: No firm allowed to hike drug prices beyond limits

Huawei gets back at FCC with legal challenge