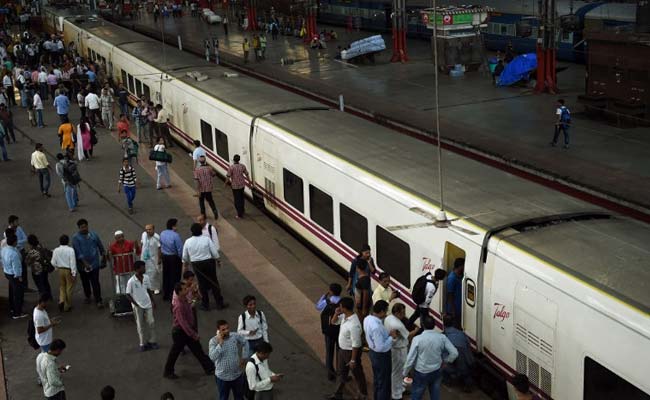 Mumbai–The Spanish-made Talgo high-speed train reached Mumbai from New Delhi on its third and final trial run on Tuesday but over three hours late owing to heavy rains, an official said on Tuesday.

The train, which left New Delhi at 7.55 p.m. on Monday evening, completed the 1,384 km trial run despite delays on account of heavy rains which flooded tracks in the Gujarat-Maharashtra border area. It reached Mumbai Central Terminus at 11.40 a.m. against the expected time of 8.31 a.m.

The Talgo, with nine lightweight coaches, is expected to cut down travel time between New Delhi and Mumbai by around four hours – from the existing 16 to 12 hours – though exact schedules are not yet finalized.

As the gleaming white train with pink double stripes and its logo passed by certain stations en route on the Mumbai suburban sector, many commuters waved at it, screamed in joy and clicked away pictures.

The Indian Railways termed the trial run a “great success”, saying it recorded 50 minutes gain from the scheduled run up to Ratlam.

It said around 10 km of rail tracks between Vapi-Bhilad-Mumbai route washed out due to heavy rainfall, affecting train services.

Further trials of this train are expected to be undertaken on August 5, 8 and 14 with higher speeds on curves and increasing to 140 kmph and 150 kmph with each trial.

After further trials and clearances for various parameters like safety, speed, stability and brake systems from the Commissioner of Railway Safety, the train is expected to be commissioned by Western Railway around March 2017.

The Talgo, often referred to as a ‘semi-bullet train’, comprises nine deluxe coaches, including two executive class, four chair cars, a cafeteria, a power car and a tail-end for the guard, staff and equipment.

Time to speak up for trading system: WTO chief

Rupee touches fresh low of 71.97 per US dollar, recovers

Tourism projects worth Rs 300 crore cleared for UP