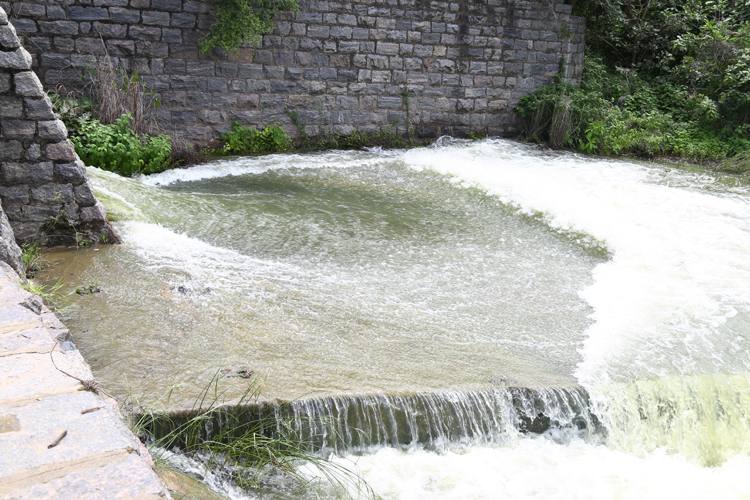 Adilabad–Restoration of a centuries-old minor irrigation tank system has raised hopes among farmers in Telangana, notorious for recurrent droughts and farmers’ suicides.

A visit to a few tanks in Adilabad, the backward district bordering Maharashtra, revealed that ‘Mission Kakatiya’ — the flagship programme of the state government — has started yielding results.

The chain of tanks brimming with water and the hectic activity in the surrounding fields show the restoration of the unique system is proving a boon to farmers after successive droughts over the last two years.

The Telangana Rashtra Samithi (TRS) government last year launched the ambitious ‘Mission Kakatiya’ to restore 46,531 tanks across the state at a cost of Rs 20,000 crore in five years to create a storage capacity of 255 TMC (thousand million cubic feet) of water.

Under the first phase completed in April, 8,000 tanks have been restored at a cost of Rs 1,600 crore. Another 9,000 tanks were taken up under the second phase during the current financial year, said Sridhar Rao Deshpande, Officer on Special Duty to Irrigation Minister Harish Rao.

The National Bank for Agriculture and Rural Development (Nabard) has released Rs 1,000 crore for the programme and has shown its willingness to provide another Rs 1,000 crore. The state government has also approached NITI Aayog for Rs 5,000 crore.

Water was one of the three key issues taken up by TRS in its fight for Telangana state, highlighting how the irrigation sector in the region was victim of discrimination by successive governments in united Andhra Pradesh.

While embarking on construction of major projects across the Godavari and Krishna rivers pending for decades, the TRS government also focused on restoring the minor irrigation system said to have been built during the Kakatiya dynasty (1163-1323).

In an upland, undulated and semi-arid region like Telangana, where nine out of its 10 districts are drought-prone, minor irrigation is considered the key to the agriculture sector, which is the source of livelihood for 65 per cent of state’s 3.5 crore population.

Experts say the tank irrigation is best suited as over 85 per cent of the farmers belong to the small and marginal category with an average land holding of 1.11 hectares.

About 63 per cent of the farmers depend on rain-fed agriculture and more than 70 per cent of cropped area is rain-fed, resulting in lower yields per unit area.

“The minor irrigation tanks have an irrigation potential of 25 lakh acres out of which only 37 per cent is irrigated,” said the official.

Under Mission Kakatiya, authorities have taken up desiltation, built or repaired bunds, cleared catchment area and feeder channels of encroachments, repaired damaged sluices and surplus structures and also laid canals up to the fields.

The farmers were hugely benefited by the silt removed from tanks as they used it in their fields, improving soil fertility. It is estimated that the silt increased cotton and chilli crop yield by 20 to 30 per cent and reduced use of chemical fertilisers by 30 per cent.

“After using the silt removed from the tank in my field, there was hardly any need for fertiliser,” said P. Narsaiah, who grows turmeric under the Dyangapur tank near Nirmal town.

Among the restored irrigation systems in the district is Parimandal anicut, or chain of tanks built over 150 years ago. “The farmers growing paddy and turmeric are now assured of water availability for the entire crop season of 120 days,” said Shivaiah, sarpanch of village head of Parimandal.

Built in 1891, Sadarmat anicut has also been taken up for restoration. Nine tanks under this system irrigate about 4,000 acres of land.

With sufficient water available in Bora tank in Laxmanchanda, farmer Sirajuddin is confident of raising two crops this year.

“People were sceptical in view of their experience in the past but after seeing the results, their aspirations have gone up,” said M. Jagan Mohan, Collector, Adilabad.

India-US military logistics pact could be functional by July

Apple car may become reality in 2023

Uber sued for $10 mn in sexual assault case in US