New Delhi–The number of foreign tourists in India increased by 16.5 per cent in January 2017 as compared to the corresponding month last year.

Similarly, Domestic Tourist Visits (DTVs) registered an increase of 15.5 per cent in 2016 when compared to that in 2015, said the Union Ministry of Tourism on Thursday.

“Tamil Nadu and Uttar Pradesh have maintained the first and second rank, respectively, in terms of DTVs in 2016,” the statement added. 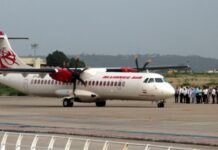 Apple fortifies platform security for billions of its devices