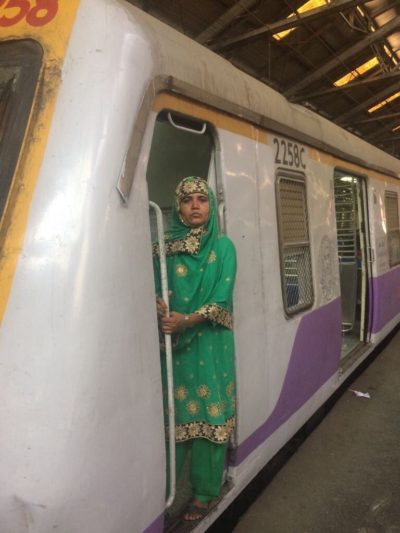 Kazi, 45, who has been driving different types of trains, is presently a motorwoman piloting suburban locals trains of Central Railway on the Chhatrapati Shivaji Maharaj Terminus-Thane section – which is also India’s first and most congested railway route now.

Hailing from an orthodox Muslim family, she has been a train engine driver since nearly 25 years now, inspiring millions of women in the country, said a CR official.

However, the going was not easy for the girl who passed out in 1989 from the Seth Anandilal Podar High School, Santacruz suburb, and applied for a railway job.

The first person to resist was none other than her father, Allarakhu Ismail Kathawala, a senior railway employee, but some family friends and rail officials convinced him to let Mumtaz pursue her unusual dream.

She went onto earn accolades for her achievements and her family, earning awards and honours from all over the country and today her entire family is extremely proud of her.

Married to an electrical engineer, Maqsood Kazi of Nandurbar, Mumtaz lives in Sion with her family comprising 14-year-old son Tausif and 11-year-son daughter Fateen who study at the nearby Our Lady of Good Counsel High School.

Temple money from ‘hundis’ not to come under scanner: Government

United Bank of India to raise up to RS 827 crore via equity issues,...

GST to spur assessee base by 80%: Jaitley